You are here: Home / Tips / How to Attract Owls to Your Yard

Along with eagles and hawks, owls are one of the rare flying carnivorous predators we still have around, the difference being that owls specialized in night hunting. 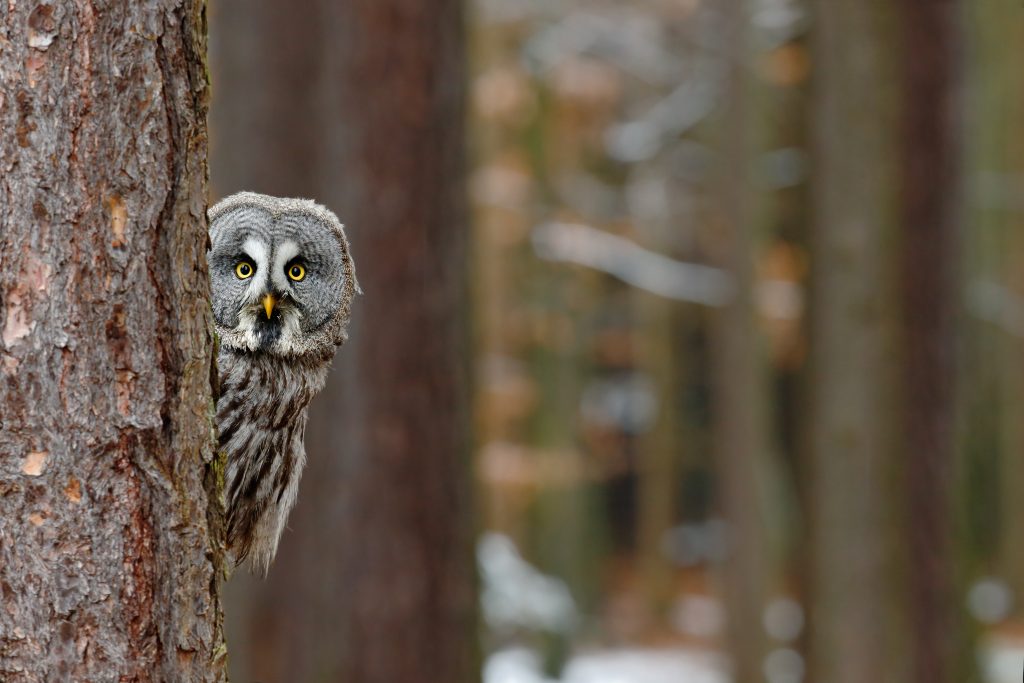 Owls serve a vital role in the ecological food chain, culling all kinds of rodent species so they don’t breed out of control and run amok through farm fields and gardens: rabbits, skunks, mice, rats, and even smaller birds who like to feast on crops.

Owl’s hunting efficiency and ferocity is so legendary that merely putting their likeness to serve as a decoy ruse, is enough to scare away these pests, at least for a while.

Accordingly, it goes without saying, but we’ll say it anyway, that if you have smaller pets you should not attract owls to the vicinity of your backyard. Owls also vary greatly in size, so a Great Horned owl is definitely capable of picking up a small dog, chicken, or cat, not to mention other birds.

Furthermore, if an owl finds a plentiful source of meat, it will mark that territory as its hunting ground, until that meat source is depleted.

So, you already have some reasons for both attracting and not attracting owls to your immediate home area, it all depends on your purpose. If you want to put the fear of god in all kinds of rodents and birds, and keep them out of your painstakingly nurtured garden, then owls will become your best friend. They have quite a ferocious appetite!

On the other hand, if you would just like to have them around as exotic, wild pets, your concerns about attracting and keeping them will be the same as with a person who wants to utilize them as garden/crop guardians.

Unlike most birds, owls like to nest in hollow cavities in trees, instead of building up a nest on tree branches, roofs, etc.

However, some species of owls, like the screech owl, are not as picky so they will be happy with an artificial box for their new home. Additionally, you can buy wooden nesting boxes that, when affixed to a tree, are more vertical than horizontal, so the owl will perceive them as natural tree cavities.

You can find all kinds of nesting boxes online, depending on the thickness of your tree candidate. These nesting boxes should be placed at least 10 feet above the ground, and if possible next to the nesting box should be a larger branch upon which owl can perch and easily enter and exit their nesting box.

It is important that the tree you will use to attach the nesting box has larger branches for perching, because owls will use them to scan for their prey. Also, consider the owl’s future family, so position the nesting box perpendicular to a large leafy branch witch can serve as a safeguard for their young from falling all the way to the ground.

On the other hand, make sure that up to 10 feet there are no large branches, so that predators can’t climb up as easily to claim their young. You should also keep in mind that different owls breed in different seasons, so a Barn Owl will breed in late March, while a Barred Owl will begin to breed as early as January. Inform yourself on which species of owl is prevalent in your area.

Many people have backyard flood lights, which are now even more convenient because they can be solar-charged during the day. If you intend to attract owls, you should put these lights on a timer, preferably at a time you go to bed.

Remember, owls are nocturnal hunters, so an obscured, debilitating vision for us is a natural hunting condition for them! They will not protect your garden if it is flooded with light all night long.

In addition to nesting box, you should add a bird bath in the immediate area or just next to the nesting box. Bird baths will give them fresh water, and you can always add a solar powered heater in the winter so that the water does not freeze.

Also, as is the case with all birds, owls like to preen themselves so they can take flight at a moment’s notice. Therefore, a bird bath will perform a very important dual function.

Not only should you turn off the floodlights during the night and not produce much noise in order to make owl’s hunting ground resemble their natural state, you should also refrain from frequent lawn mowing and general landscaping.

Rodents are on owl’s most favorite food menu, so they should feel relatively safe to traverse the ground. And the more traffic they make, the more opportunities owls will have to satiate their appetite, or feed their family.

Just don’t go overboard with leaving the grass to grow; certain patches of taller grass should prove sufficient for lulling rodents into a false sense of security.

This also goes for pruning tree branches and clearing out bushes. If you have a habit of keeping everything tight and clear, make a conscious effort to do less of it, as such environment does not resemble owl’s natural habitat.

If you have poultry running around, make sure to lock them down in roofed cages as soon as the sunlight begins to die out.

On a final note, nesting boxes, bird baths, and other bird accoutrements are pretty cheap, so you should not constrain yourself on just buying one of each. Owls tend to be picky and cautious creatures of the night, so putting up multiple nest boxes – aligned vertically with a tree trunk so they mimic natural tree cavities – would likely yield a more expedient result in attracting owls.

Be consistent, use common sense, learn about owls, and soon enough you will be awarded with a formidable feathery companion.